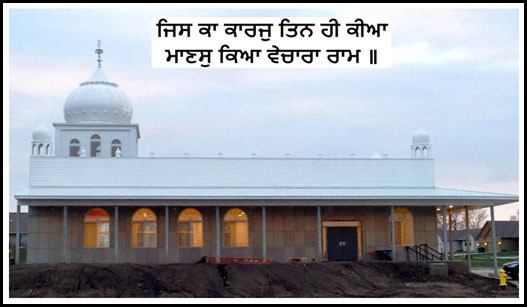 Although they have lived in Iowa since at least the mid twentieth century, only recently have the Sikhs of central Iowa had their own spaces of worship. In 1998, the Sikhs of Iowa Khalsa Heritage, Inc. dedicated their very first temple, a former Jehovah Witness’s church in West Des Moines, and in 2013 the Sikhs of Iowa Khalsa Heritage completed construction on a brand new Sikh temple in Johnston. Both buildings are commonly referred to as temples; more precisely, though, they are gurudwaras—doors to the Guru.

The word guru has many applications, though only one root meaning—that which dispels the darkness of ignorance (gu) and leads to enlightenment (ru). Sikhs believe that a lineage of ten human gurus did just this during the 16th and 17th centuries in northwest India, prophetically teaching the revealed tenets and practices of Sikhism. Upon the death of the tenth guru, the enlightened soul of the gurus passed into the Sikh holy book (Guru Granth Sahib), which has since served as the “living guru” for Sikhs. But the ultimate guru is God, whom Sikhs commonly refer to as Waheguru, Wondrous Guru or Lord.

The gurudwara’s actual door opens to community worship every Sunday. Services begin with kirtan, devotional singing of hymns from Guru Granth Sahib, which are led by the community’s musicians. Kirtan is followed by aardas, prayers and teachings from the holy book, then by karah prashad, partaking of a “sacred pudding” that has been blessed by God. But worship is really not over until langar has been served—a free community meal that is distributed to all without regard to creed, class, race, or sex.

This simplicity of worship and equality of worshippers is reflected in more than just Sikhism’s weekly gurudwara services; it also permeates Sikh polity, principles, and practices.

Unlike most Indian religions, Sikhism has neither official priesthood nor monastic order; any member of the congregation can read, teach, pray, and meditate from the Guru Granth Sahib. Still, many gurudwaras, such as the one in West Des Moines, employ trained “custodians” to conduct services. Others draw instead on members of their congregation—men like the current president of the Johnston gurudwara, Kanwarpal Dhugga.

Sikhism’s “three pillars” also stress principles that can be practiced by every Sikh: honest living, selfless service, and meditation on God’s name. And Sikhism’s “five external articles of faith” require a code of dress that applies to all Sikhs: uncut, covered hair (kesh), a comb to hold that hair in place (kangha), a short sword (kirpan), a steel bracelet (kara), and cotton undergarments (kachhera). When the tenth guru first instituted these “5 K’s” in 1699, they symbolized Sikhs’ initiation into the Khalsa: a religious military order through which Sikhs would defend their faith against persecution. Although that form of persecution has ended, the Khalsa and its external articles of faith continue to convey the utmost devotion and discipline of Sikhs. Thus Sikhs continue to greet one another, Waheguru ji ka Khalsa, Waheguru ji ki Fateh. “To God belongs the Khalsa, to God belongs the Victory.”

Etiquette for visiting the Gurdwara