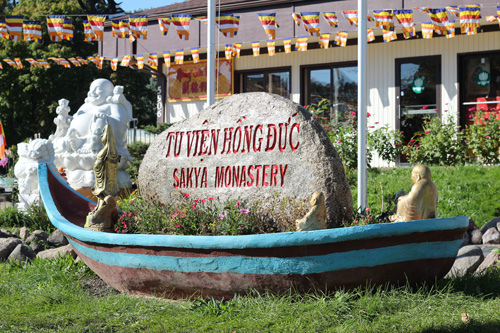 A supernatural being of immense powers, Quan Âm is one of countless bodhisattvas who take a vow not to enter nirvana until all sentient beings are saved, tirelessly employing their “skillful means” to attain this end. Quan Âm in particular hears and responds to the suffering of all; in some East and Southeast Asian Buddhist traditions she even transports devotees to a heavenly “Pure Land” upon death. It is she who helped deliver to Iowa the community that was to become Tu Vien Hong Duc.

2014 therefore marks a date every bit as important as 1979 and 2008. For it was in 2014 that Tu Vien Hong Duc erected and dedicated a towering, white marble statue of Quan Âm. Rising to a height of thirty feet, she looks out over the temple complex as well as the dozens of other Buddhist statues that fill Tu Vien Hong Duc’s “Peace Park.” People from all over, Vietnamese and other, come to seek her boundless compassion and steadfast assistance.

Although statues of Quan Âm also grace the temple’s interior, its main altar instead features the historical Buddha and his Indian bodhisattvas of compassion and wisdom, Avalokiteśvara and Mañjuśrī. But it is an infrequently depicted Buddha who figures most prominently in the practices of Tu Vien Hong Duc—Amitābha, the Buddha of Immeasurable Life and Light, who out of compassion for the suffering of sentient beings created the “Pure Land” into which devotees can be born upon death. In formal ceremony and informal greeting alike, constant refrains of A-di-đà Phật, the Vietnamese phrase for Amitābha, show how near he is to the lips and hearts of the community.

While Tu Vien Hong Duc is therefore best classified as a Pure Land Buddhist temple, it is much more a Vietnamese Buddhist temple. Many members of the community gather every Sunday afternoon for dharma talk and chanting meditation, the latter of which is often accompanied by traditional Vietnamese mourning rites. Many more attend the community’s celebration of traditional Vietnamese holidays, New Year (Tết) and Mother’s Day (Vu Lan) most of all.

In all these events and experiences it is a monk reverently referred to only as “thầy” (master, teacher) who leads the way. Indeed, it is he who first led the community to its current home on SW 9th Street in 2008. With a little help from Quan Âm, of course.

Etiquette for Visiting the Temple