You are invited to participate in a meditation workshop on Saturday, September 6. The event features six local meditation instructors, each of whom will teach classes on their meditative practice, then engage in dialogue with one another about these practices. Participants will have the opportunity to learn about and try several techniques. Free and open to the public. Light breakfast will be served.

Listen to audio of the Dialogue portion of the event: 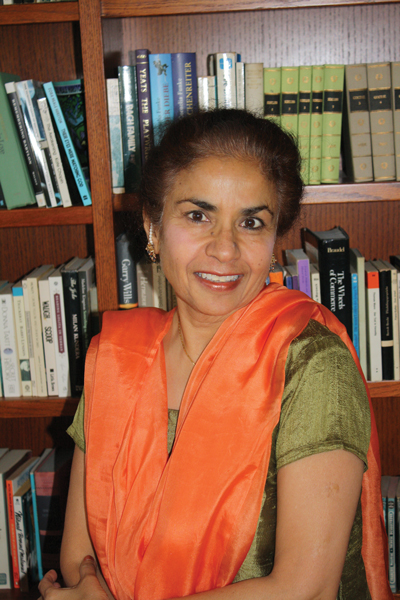 Expressing the Inexpressible: The Heartbeat of Sikh Mysticism

“Beat of the heart” can serve as a metaphor for understanding the complexities of Sikh mysticism. Like the flow of blood in this vital organ, Sikh mysticism is vividly, compactly, though ineffably conveyed as the flow (phora) across (meta) the physical and the metaphysical, the noumenon and the phenomena, the spiritual and the practical. Since metaphors maintain a dynamic tension between a simultaneous “is and is not,” they perform a uniquely revelatory function (Paul Ricoeur, 1976). My question then: with the beat of the heart as our metaphor, what “new vision of reality springs forth”? What sonic, semantic, and existential aspects of Sikh mysticism can we recover?

Nikky-Guninder Kaur Singh is the Crawford Family Professor at Colby College. She has published extensively in the field of Sikhism, and her views have been aired on television and radio in America, Canada, England, India, Australia, and Bangladesh. Born in India, Professor Singh came to America to attend Stuart Hall, a Girls’ Preparatory School in Virginia. She later received her B.A. in Philosophy and Religion from Wellesley College, her M.A. from the University of Pennsylvania, and her Ph.D. from Temple University.

Listen to the audio of Prof. Singh’s talk: 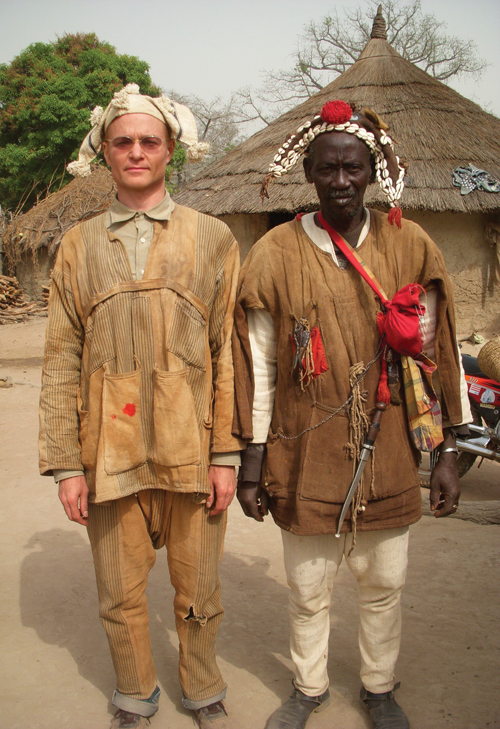 Translating the Ineffable: How Hunters Hear and Talk to the Dead in Côte d’Ivoire
Lecture by Joseph Hellweg, Associate Professor of Religion, Florida State University

In the northwestern, Muslim area of Côte d’Ivoire (Ivory Coast), hunters communicate with a forest spirit, Manimory, and the spirits of other dead hunters through ritual sacrifices. The goal is to assure safe hunting. Since spirits cannot speak human language, they communicate through divinatory signs. They also send dreams to hunters. Hunters then translate these signs of the ineffable into human terms in order to hunt. Jewish, Christian, and Muslim theologians, in contrast, associate the ineffable with God on high. For theologians, talk of ineffability reflects the assumption that God is beyond human understanding. For hunters in Côte d’Ivoire, however—who also practice Islam—the spirits of dead hunters link them to God because, they say, the forest spirit, Manimory, descended from Abraham. Ineffability, in their case, reflects the sacred nature of local, practical pursuits like hunting as much as God’s transcendence.

Joseph Hellweg is Associate Professor of Religion at Florida State University. A cultural anthropologist by training, he has done over five years of field research in Côte d’Ivoire, Guinea, and Mali. His first book, Hunting the Ethical State: The Benkadi Movement of Côte d’Ivoire, chronicled a security movement manned by West African hunters. He is now writing a second book about these hunters titled, Practical Religion: Hunting, Islam, and the Poetics of Action in the Songs of Dramane Coulibaly; it examines the praise-songs and epics that hunters sing. He has also written a book in French on anthropological research methods. More recently, he has been studying the African-invented N’ko alphabet in Guinea and Mali. His article on the literacy movement linked to this alphabet appeared in the collection, Living the City in Africa. He does his research in French and Malinké, which he speaks fluently.

Watch the video of Hellweg’s talk: 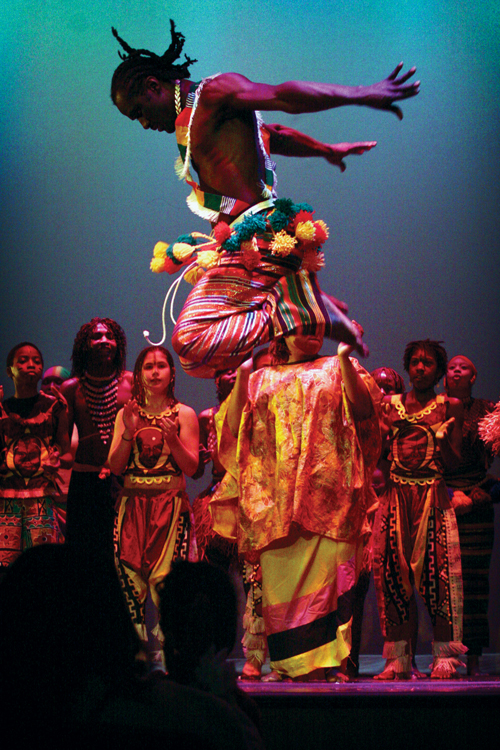 The workshop will cover the study of West African dance and the accompanying music. Special emphasis will be placed on the dance, drumming, culture, language and arts of Ivory Coast, Guinea and Ivory Coast. It will consist of lecture and demonstration followed by active participation by students, primarily dancing and learning about the music. Students will build technique and develop an appreciation and understanding of the relevant resources available and how to research within them.

Diadié (pronounced Jah-Jay) Bathily has danced professionally for over 30 years on stages in Africa, Europe and North America. He is a world-renowned dancer, choreographer, instructor and costume designer. Bathily has conducted master classes and workshops throughout Europe and North America and has performed with or choreographed for such notable companies as the Cleo Parker Robinson Dance Ensemble, the Katherine Dunham Centers for Arts & Humanities, Ecole de Danse et d’Echange Culturel with Ms. Marie Rose Guiraud, and Broadway Dance Center. He is the recipient of the N’gowa Prize for dance on the Ivory Coast and has performed at the United Nations, the Village of Arts and Humanities in Philadelphia and many festivals and events around the United States.

In 2003, he founded his own non-profit dance company, Afriky Lolo (Star of Africa) with troupes for adults, adolescents and children. They have performed and presented workshops all over the United States. Bathily was a guest choreographer and performer at Florida State University in Tallahassee, Florida and a visiting choreographer at Malcolm X College in Chicago. He also founded a satellite troupe of Afriky Lolo in Chicago.

See photos from the Dance Workshop

Watch a video of the dance workshop: 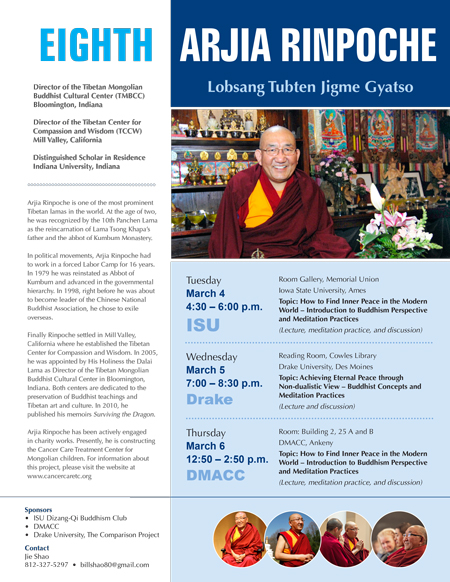 Arjia Rinpoche is one of the most prominent Tibetan lamas in the world. At the age of two, he was recognized by the 10th Panchen Lama as the reincarnation of Lama Tsong Khapa’s father and the abbot of Kumbum Monastery.

In political movements, Arjia Rinpoche had to work in a forced Labor Camp for 16 years. In 1979 he was reinstated as Abbot of Kumbum and advanced in the governmental hierarchy. In 1998, right before he was about to become leader of the Chinese National Buddhist Association, he chose to exile overseas.

Finally Rinpoche settled in Mill Valley, California where he established the Tibetan Center for Compassion and Wisdom. In 2005, he was appointed by His Holiness the Dalai Lama as Director of the Tibetan Mongolian Buddhist Cultural Center in Bloomington, Indiana. Both centers are dedicated to the preservation of Buddhist teachings and Tibetan art and culture. In 2010, he published his memoir Surviving the Dragon.

Arjia Rinpoche has been actively engaged in charity works. Presently, he is constructing the Cancer Care Treatment Center for Mongolian children.

This event is sponsored by:

Listen to audio of Rinpoche’s talk: 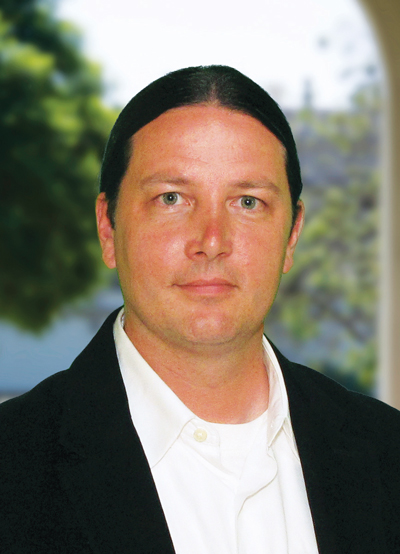 How does one speak the unspeakable, say the unsayable, name the unnameable? How does one subvert the human tendency to become mired in intellectual constructs, philosophical rumination, and psychological confusion, especially with respect to matters of ultimate concern? This talk examines Daoist uses of “apophatic discourse” and “grammars of ineffability,” or the way in which (apparent) negation is central to Daoist approaches. In addition to providing a foundational introduction to Daoism in general and the Zhuangzi (Book of Master Zhuang) in particular, Komjathy will explore Daoist meditation and mystical experience, with attentiveness to representative modes of expression and description. In the process, he suggests that one must understand Daoist contemplative practice and mystical experience as the root of “Daoist philosophy.” Daoist apophatic discourse presupposes a contemplative and mystical perspective on being and sacrality. It is a praxis-based and experiential perspective. Daoist views of language in turn reveal alternative uses of linguistic expression, beyond mere communication and description. We may begin to imagine “soteriological linguistics.”

Louis Komjathy (Ph.D., Religious Studies; Boston University) is Assistant Professor of Chinese Religions and Comparative Religious Studies at the University of San Diego. A leading scholar of Daoism (Taoism), his particular interests include contemplative practice and mystical experience. He is also founding Co-chair (2004-2010) of the Daoist Studies Group of the American Academy of Religion, founding Co-chair (2010-present) of the Contemplative Studies Group of the American Academy of Religion, and manager of the Contemplative Studies website. He has published widely on Daoist religious practice, including the recent The Way of Complete Perfection (State University of New York Press, 2013) and The Daoist Tradition: An Introduction (Bloomsbury Academic, 2013). Beyond his academic work, he is a member of the advisory board for Monastic Interreligious Dialogue and founding Co-director of the Daoist Foundation, a non-profit religious and educational organization dedicated to fostering authentic Daoist study and practice.

Listen to audio of Komjathy’s talk:

Or view his presentation: 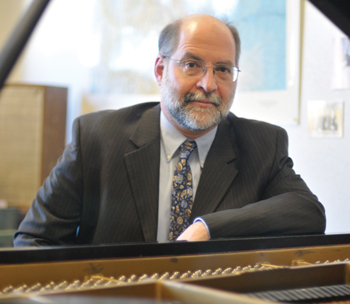 Poets and philosophers have long agreed about music’s ability to express the inexpressible. The kinds of music to which they imputed this elevated capability, though, varied widely. By the mid-nineteenth century, the expressive vocabulary of western music was highly developed and well understood; today, though, its subtleties are largely forgotten. As a result, what to us might seem like an evocation of the Infinite might in its own time have been an expression of something far more explicit or even everyday in nature. Thus, musical expressions of the ineffable and thoroughgoingly effable are far closer than we might suspect. Much of music’s ability to reach beyond verbal language, then, is granted by and relies upon the expectations of the listener, rather than being inherent in the music itself.

Jonathan D. Bellman is a Professor of Music History and Literature and Head of Academic Studies in Music at the University of Northern Colorado. He earned piano performance degrees from the University of California, Santa Barbara and the University of Illinois, and a Doctor of Musical Arts in Piano Performance Practices at Stanford University in 1990. His most recent book, Chopin’s Polish Ballade: Op. 38 as Narrative of National Martyrdom, was published by Oxford University Press in 2010. His articles have appeared in journals including The Journal of Musicological Research, Musical Quarterly, Nineteenth-Century Music, Early Music, Historical Performance, and The Journal of Musicology. His research interests include musical style in general, musical exoticism, the music and performance practices of Frédéric Chopin, and the concert music of George Gershwin. 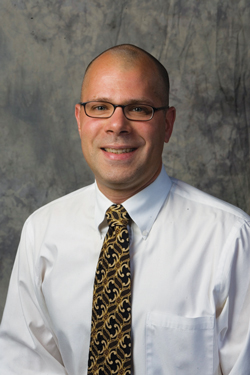 How does one say what can’t be said? How does one speak about an unspeakable God? This “problem” is central to the influential writings of the anonymous sixth-century Christian mystic known to us as Pseudo-Dionysius the Areopagite. While Dionysius’s Trinitarian God remains the cause of all, it is at the same time beyond all words, names, and assertions. And although Dionysius sometimes simply asserts this apparently paradoxical claim, he more frequently performs it through a series of grammar-violating linguistic techniques. Prof. Knepper’s lecture will begin by examining this discourse of ineffability in the Dionysian corpus; it will then put it into comparative conversation with the other discourses of ineffability that The Comparison Project has examined this semester.

Timothy Knepper is an associate professor of philosophy at Drake University, where he chairs the Department of Philosophy and Religion and directs The Comparison Project. He teaches and publishes in the philosophy of religion, comparative religion, late ancient Neoplatonism, and mystical discourse. He is the author of books on the future of the philosophy of religion (The Ends of Philosophy of Religion, Palgrave, 2013) and Dionysius the Areopagite (Negating Negation, Wipf & Stock, 2014). And he is currently working on edited collections on “Philosophy of Religion for Religious Studies” and “Discourses of Ineffability in Comparative Perspective.” 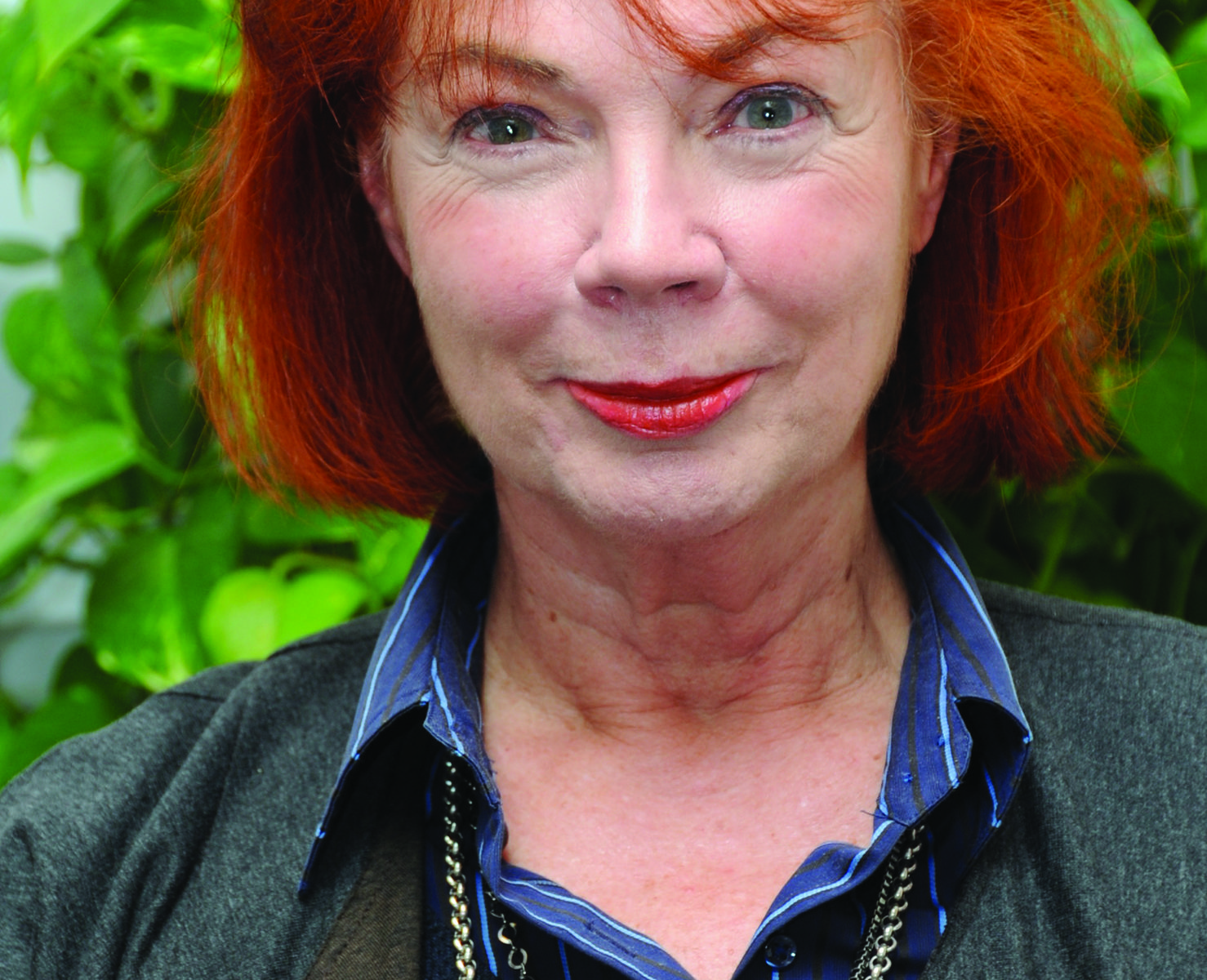 Barbara Stafford’s research strives to find precise ways of bringing neurobiology, cognitive science, and the new philosophy of mind together with cultural phenomena without falling into reductivism on either side. In this lecture, she will tackle a comparatively understudied and relatively under-researched area in the contemporary neurosciences—an area where the imaging side of the humanities has much to contribute—the importance of selective attention. What are the inducements for attending carefully to the subtleties of the world?

Barbara Maria Stafford is an independent writer, curator and speaker. Her work has consistently explored the intersections between the visual arts and the physical and biological sciences from the early modern to the contemporary era. Her current research charts the revolutionary ways the neurosciences are changing our views of the human and animal sensorium, shaping our fundamental assumptions about perception, sensation, emotion, mental imagery, and subjectivity. Her most recent book is The Field Guide to a New Metafield: Bridging the Humanities-Neurosciences Divide [2011].